It’s not easy to take over government services, but so far outsourcing companies have kept pace with the market

Painful spending cuts are supposed to be good news if you’re an outsourcing company - or so they claim. But although shares in the industry’s biggest outsourcers have generally kept pace with the rest of the market since the Comprehensive Spending Review last October, it’s far from easy taking over government services.

Local government could be an easier nut to crack, says Andrew Nussey of Peel Hunt, but the early contracts will simply be from those local authorities who have already gone down the outsourcing route. “The contracts are getting bigger and more integrated and will fall into the hands of the larger players.” A second and third wave of outsourcing could follow from councils that currently have most of their services in house, Nussey thinks, but the benefits are unlikely to be felt this year.

May Gurney’s impressive 18% rise in revenue, recorded last Thursday, was not attributed to a “wave” of outsourcing by local councils. “We have not seen a surge in demand as yet,” the firm said. And the market has been jittery about Serco, which relies on the public sector for around 90% of its revenue.

Outsourcing firms are telling the market that the drive to privatise will outweigh budget cuts to public provision. We will see whether they are correct by the end of the year. But at the moment, there seems to be little evidence that government bodies are queuing up to outsource their services. 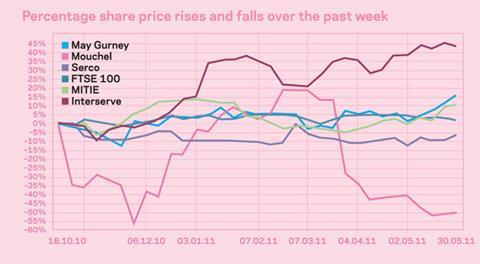