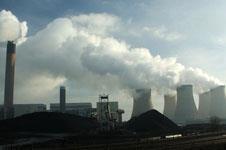 Clean coal technology could bring £2-4bn into the UK economy each year and support up to 60,000 jobs by 2030, according to new research out today.

The report from energy consultancy the AEA Group has been published to coincide with the launch of the government’s consultation on plans to develop carbon capture and storage (CCS) in Britain.

It says new opportunities could be created in sectors including engineering, manufacturing and procurement, generating 30-60,000 British jobs.

In April, Ed Miliband, the climate change minister, set out proposals to boost the industry. They include:

If CCS takes longer to be proved than expected, the government has said it could use other measures such as an annual cap on emissions from individual power stations.

Miliband said: “The conditions we’re proposing for new coal are the most environmentally ambitious of any country in the world, requiring the demonstration of CCS on a substantial proportion of any new power station and the 100% retrofit of CCS when it’s proven.

“At the same time, by providing funding for demonstrations, we can maintain coal as part of our energy mix, supporting diversity and therefore security of supply.

“By acting early, jobs will also be created as Britain develops the expertise in what could be a major new industry, with CCS projects offering the potential to form the hubs for clusters of low carbon industries.”

The consultation comes amid widespread dissatisfaction with the pace of the government’s clean coal programme. Last month, Building revealed that plans for the first £1bn demonstration project are two years behind schedule.

The closing date for the consultation is 9 September 2009.