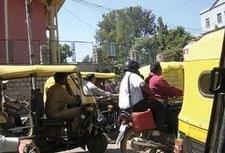 In the latest instalment of the diary of a QS forming a joint venture in India, the co-founders of London-based Box Associates find themselves on the wrong end of a web hosting company

What is a company without a website these days? With that thought in mind, we set about purchasing a web address for our new venture, Box India. A quick search of available names showed that some shadowy packaging company had already got dibs on various derivatives marrying “Box” with “India”.

Not to be outdone, our Indian partners secured the next best thing – www.box-india.com. However, as a probable taste of things to come, this proved to be blind alley as the company they purchased the domain through then wanted to charge a fortune for web hosting and wouldn’t hand over the registration if we didn’t agree to pay their extortionate charges.

We didn’t know whether this was just because a UK company was involved or if it was symptomatic of the Indian market in general, but it’s obviously something to keep in mind. At least we wouldn’t have to negotiate for office space at this stage as we would be starting off from Panora’s Pune office (cheaper than Mumbai and with a highly educated workforce).

We retreated to the safety of our own UK service provider and went with www.boxassociatesindia.com. A bit more of a mouthful than we had hoped but I suppose it was only a matter of time before the virtual world ran out of simple domain names.

Next, the all important colour of the logo.

We initially thought the vibrant red of Tikka Masala sauce would combine the vibrancy of the company together with the Indian flavoured theme ... until we remembered this was actually the British national dish, supposedly invented in Scotland.

Our graphic designer eventually decided on orange, “inspired” by the saffron in the Indian flag, and definitely not from the mobile phone company as my wife suggested.

A holding page has now gone live and we are registered with the RICS and coming up a very healthy second place in the RICS firms search for quantity surveyors in India.

Next on the list is a brochure. Oh yes, and the small matter of thrashing out the joint venture agreement ...