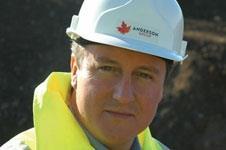 The Conservative Party will announce plans for 1 million homes to generate energy to sell back to the national grid.

In a speech today, David Cameron will unveil plans for micro-generation whereby every household is encouraged to use renewable energy sources to contribute to the nation’s energy supply.

The scheme will run for 20 years, ensuring producers will receive a guaranteed price on energy they sell back to the grid. Homeowners can expect a 8-10% return on their investments.

The plans will put the UK up to par with other European countries where micro-generation has been established for a number of years. In Germany, it contributes 12% to the national energy production.

If the scheme were to go ahead it would require a restructuring of the UK’s energy industry. Details of the proposal will be announced in Cameron’s speech this afternoon.