Construction activity increases in May

Construction activity grew again in May according to the latest Markit/CIPS PMI data.

Activity in the sector increased further last month following on from a slight increase that was recorded for April – a figure of 54.0 was posted for May, up from 53.3 in April.

The positive results were attributed to a rise in new business and the release of previously moth-balled projects. A modest increase in the level of construction employment was also recorded, ending a ten month sequence of job cuts.

There was also a slight expansion in the rate of house building during April however civil engineering saw a reduction in activity for the first time in five months.

While the latest reading for May pointed to stronger levels of activity in the industry, the index remained below the Q1 average.

Sarah Ledger, economist at Markit and author of the UK Construction PMI said:

“Construction sector activity grew again in May, with the rate of expansion accelerating slightly since April. Moreover, new order growth was marked, suggesting that increasing levels of output will be sustained.

“A look at the sub-sectors monitored shows a mixed picture, with levels of civil engineering activity down markedly, but a return to growth for housing. Commercial output growth was broadly consistent month-on-month, with the average for the quarter so far outpacing that of Q1.

“Positive sentiment regarding future business activity rose to a one-year high, although concerns over public sector spending cuts continue to weigh on confidence.” 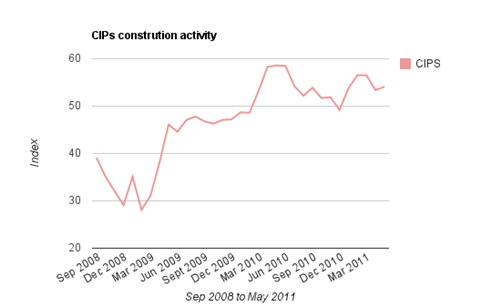