Construction industry recession to deepen in 2012

The construction industry faces another year of recession, economic forecaster Experian has said.

The data firm this week has downgraded its predictions for construction output to forecast a contraction of 4% in 2012 following a 3% drop for 2011.

In its previous forecast, published in the winter, Experian had said output would be static in 2012.

It also revised its figures for growth in 2013 down from 5% to 4% between its winter and summer forecasts.

The firm made its downward revision because it said private sector recovery would be weaker than previously thought and the impact of public sector cuts was starting to be felt.

Public housing and repairs and maintenance were expected to do better than in the winter forecast but will still fall year-on-year.

James Hastings, head of construction futures at Experian, said: “The problem in 2012 is we do not see the private sector bouncing back quite as strongly as we hoped and that is in line with the general economic forecasts.” He said growth in the private housing sector was expected to be very small from an already low base and forecasts for the commercial sector, with the exception of London offices, had been revised down.

Most of the public sector spending cuts were known about when Experian’s winter report was published, but subsequent cuts in councils’ roads spending and fears that the nuclear disaster in Japan could delay nuclear spending elsewhere have since dampened expectations further.

Kevin Cammack, analyst at Cenkos Securities, said: “I am not surprised about the changes they have made [to the forecast]. The slowdown in public sector has taken longer to happen [than expected].” 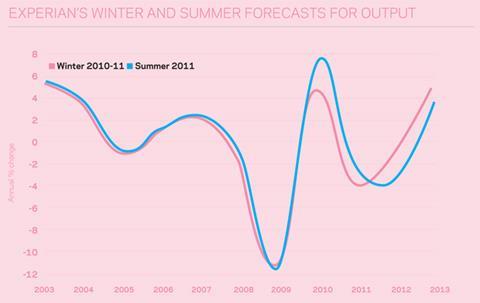 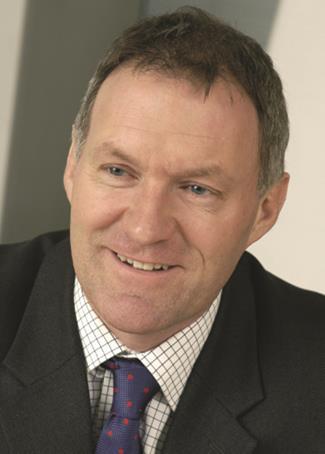 It’s no surprise that 2012 is going to be another tough year for the construction industry in the UK.

The private sector has not yet picked up as businesses struggle to get finance for development and mortgage availability for homebuyers is constrained. The pain of public spending cuts has taken time to be felt as work has continued on projects approved before the tap was turned off.
Data from PwC showed construction insolvencies down between the first and second quarters of this year but up 5% on a year ago. Unfortunately the fall in work in 2012 is now likely to lead to a rise in insolvencies among construction businesses. Those who will be hardest hit are the medium-sized players working outside the London and South-east markets who are not on big project frameworks and do not have any overseas markets.

Strong cash management will be key in 2012. Firms will have to be careful when taking on work in risky or new areas, pricing work aggressively, or using unfamiliar or financially exposed suppliers or subcontractors with problems. These false economies could end up being paid for later.

Jonathan Hook is global engineering and construction leader at PwC