Construction not expected to reach pre-covid levels until end of 2022, fresh data suggests

Delays to economic recovery post-coronavirus have sparked fears about construction demand, according to the latest Office for Budget Responsibility figures.

In March the OBR predicted the economy would take only a couple of quarters to return to its pre-coronavirus levels but it is now suggesting this will not take place until the end of 2022.

The forecast has assumed government investment will be hit by disruption in the construction sector this year – and will contract by 8% this year compared to the 2% growth expected in March.

The most likely scenario assumes departments will underspend their budgets in 2020-21 by £10bn more than predicted in the March forecast because of the lockdown’s impact on construction projects and hiring and procurement plans.

The figures have also predicted a higher unemployment rate than during the 2008/09 recession, with their central scenario predicting losses of 15% among the 9.4 million jobs. This increases to 20% in the downside scenario.

This means the best case scenario has the unemployment rate peaking at 9.7%.

HMRC’s statistics for claims for the self-employed income support scheme made up to 31 May show that by number and total value the construction sector has been the largest source, while the sector has furloughed 600,000 jobs. 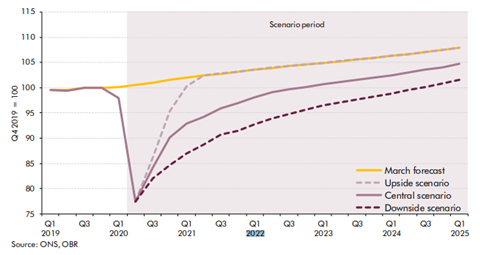