Construction primed for 4.5% growth this year

Expansion led by a surge in private housing and infrastructure work 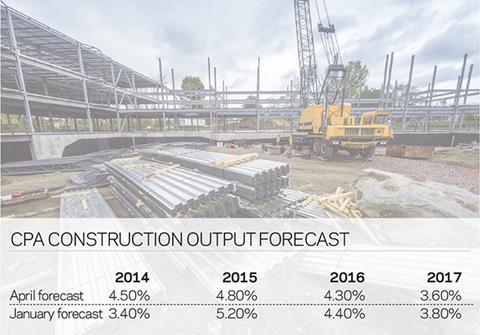 The construction industry is set to grow 4.5% this year - significantly more than previously anticipated – with the expansion driven largely by a surge in private housing and infrastructure.

In its latest industry forecasts, published this week, the Construction Products Association (CPA) revised up its previous growth forecast for this year of 3.4% – published in January – to 4.5%, largely on the back of an estimated 18% increase in private housing starts in 2014.

The CPA also revised up its estimate for infrastructure growth in 2014 from 6.8% in its previous forecast to 10.1%.

He said the government’s move in the Budget to extend the Help to Buy scheme by four years to 2012 meant the CPA now anticipated stronger growth in private housing over the full forecast period, with private housing starts set to rise by 10% in 2015 and 5% in 2016 and 2017.

“We hasten to add, however, that housing starts are only half the number needed to meet the number of households created.

“As a consequence, when this inadequate supply is combined with excess demand and general expectations of house price inflation, we expect the key issue facing the sector in the medium term will be affordability.”

However, he said the recovery in the housing market had flowed through to benefit the repairs and maintenance sector - although this sector remained hampered by the failure of the government’s Green Deal and Energy Companies Obligation retrofit schemes to boost the market. He said the energy efficiency market was potentially worth £20bn, but was only forecast to grow by 3.5% in 2014 and a further 4% in 2015.

Francis said the main risk to the forecast was ongoing concern over the government’s energy policy and the continued uncertainty over the nuclear new build programme.

Other key points from the CPA forecast include:

Flooding and severe winter storms at the beginning of the year saw construction output fall 2.8% in February, when compared to January, but the short-term fall masked a more positive long-term trend.

The ONS cited the severe winter storms and flooding as the primary reason for the short-term fall in output, with consequent repair and maintenance work yet to be recorded in the data.

The figures showed that all new work fell 2.6% between January and February, with private new housing - which has shown strong growth since March 2013 – falling by 6.3%.

The ONS said the declining trend in infrastructure continued in February, with output down 3.7% month-on-month. Repair and maintenance work fell 3.1% in February when compared with January, but rose 2.3% year-on-year. The total level of new work was estimated at £5.8bn in February, down 12.3% below its monthly peak of £6.6m in June 2011.