Construction will be among the sectors most affected should an immigration system proposed by the independent Migration Advisory Committee be introduced. 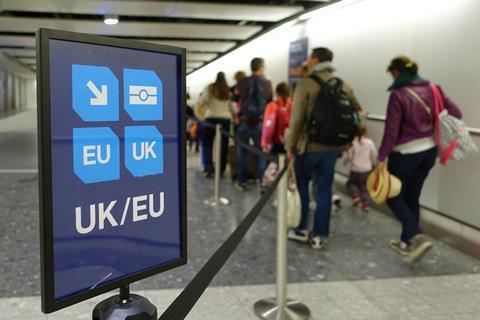 The MAC said the construction industry would be among the 20 sectors facing the largest employment impact from its proposed thresholds. In its report, published this week, the MAC suggested lowering the £30,000 minimum salary threshold to £25,600.

The MAC has said that its recommended thresholds will result in an 8% employment drop in the construction sector. It said this was because of a relatively high share of European Economic Area (EEA) migrants in the sector’s workforce combined with a very high share of self-employed workers.

Federation of Master Builders chief executive Brian Berry said the proposals for a temporary visa route for lower-skilled remained a concern. “This route will need to have a path to permanent settlement, otherwise many workers will simply choose to work elsewhere,” he said. “The government should consider giving temporary migrants the opportunity to complete training and settle on a skilled visa while remaining in the UK.”

How the system could work

The report said that EEA nationals who arrived since 2004 represented a higher share of the construction workforce, at around 6.5%, than they do on average.

This increased in the capital. The report cited analysis of self-assessment tax returns that found nationals from the new EU member states represented 55% of filers who indicated they worked in the construction industry in London.

In some good news for the sector the report recommended adding several construction job roles that were not set to become eligible when the tier 2 (general) visa is expanded to include medium-skilled jobs.

It has been recommended that air-conditioning and refrigeration engineers, skilled metal, electrical and electronic trades supervisors and carpenters and joiners all get added to the approved skills list.

The MAC has also suggested the addition of glaziers, window fabricators and fitters, plasterers, floorers and wall tilers, painters and decorators, construction and building trades supervisors.

Construction firms made up just 6% of the individual organisations that responded to the call for evidence.

The government is not required to accept any of the committee’s recommendations but is expected to base future immigration policy on the findings.