A team led by Bam has finally signed a £1bn contract with Transport for London to get work on the Silvertown Tunnel project underway - six months after it was chosen for the job.

TfL revealed that the Riverlinx consortium, which includes Ferrovial-owned roads specialist Cintra, Bam PPP and Australian bank Macquarie Capital, had been chosen and for the east London project in May.

But the contract award for the river crossing was stalled after reserve bidder Silver Thames Connect (STC) – which includes Hochtief and Dragados – lodged a legal challenge, forcing TfL to suspend the procurement process.

Last month STC agreed to TfL’s application to the court to lift the suspension, but the legal battle, which is based on the losing bidder’s concerns about the scoring process and alleged anomalies in the marking, will continue.

The signing of contracts will allow RiverLinx’s construction team, which includes of Bam Nuttall, its sister company Wayss & Freytag Ingenieurbau and Ferrovial Agroman, to appoint sub-contractors and suppliers.

The project, set to open in 2025, is the UK’s first road tunnel to have dedicated bus lanes, and from the first day, passengers will be able to cross the river on one of around 37 buses an hour during peak periods.

This will result in the proportion of cross-river trips via public transport in this area rising from 10% to 30%.

These buses are all expected to be zero emission vehicles and will support the increasing demand for bus transport across Greenwich, Newham and Tower Hamlets.

The Silvertown Tunnel aims to prepare for London’s future population growth and relieve the congestion and poor air quality around the 122-year old Blackwall tunnel. 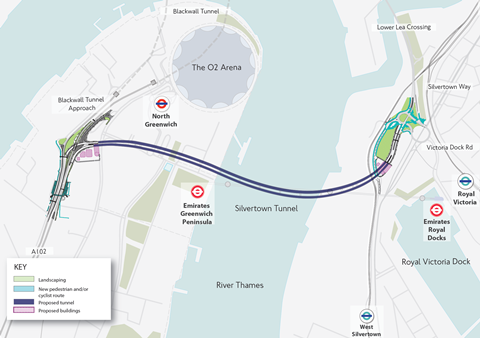