Scheme had been recommended for approval but Tower Hamlets pulls decision 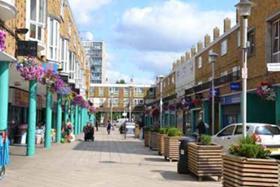 The regeneration of a rundown east London market has fallen victim to pre-local election political in-fighting, the scheme’s backers have claimed after Tower Hamlets council shelved a decision on it last week.

The £280m plan for the redevelopment of 650 homes and the regeneration of a listed post-war shopping precinct was deferred by the east London authority’s strategic development committee last Thursday.

A joint venture between social housing landlord Poplar Harca and housebuilder Telford Homes submitted an application last year for 650 new homes and around 20,000m2 of new retail space in the Chrisp Street market.

The scheme involves clearing a 3.7 ha site north of East India Dock Road except for a set of market buildings, a clock tower and pub, all designed by Sir Frederick Gibberd as part of a ‘Live Architecture Exhibition’ held to tie in with the Festival of Britain in 1951.

The market also features one of the first purpose built pedestrian shopping precincts to be developed in the UK.

Under plans, drawn up by architect Sheppard Robson, 19 new buildings will be developed, including a 25-storey tower.

The scheme’s other features include an extension of Poplar’s Idea Store library, a new cinema and public square.

According to a report submitted by council officers to the committee last week, which recommended approval, the scheme would increase the number of social rented units on the site from 124 to 131.

In addition, it would deliver another 75 shared ownership and Tower Hamlets Living Rent homes, increasing the amount of affordable housing by nearly 12%.

But the plans have met with resistance from some market traders who are worried that loss of car parking will undermine their passing trade and by local campaigners who have accused the developers of gentrifying the neighbourhood by building market housing.

A Poplar Harca spokesperson said the scheme has been in planning and consultation for eight years and added: “A handful of people with vested interests have made a disproportionate amount of noise against the plans at the very last minute, and elected members and candidates have exploited the timing of this decision for political ends.

“That this has had such an influence on a scheme that provides for more shops and market stalls, support for existing traders to stay long term, more social and affordable housing, and more jobs and amenities is heartbreaking and, unfortunately, could jeopardise the entire scheme.”

A council spokesperson said a revised report would be brought back to the committee in due course.

Because of their scale, the Chrisp Street plans would require the final approval of London mayor Sadiq Khan.