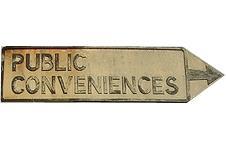 Local councils could be forced to build more public toilets, after MPs called for authorities to draw up annual public toilet strategies.

A new report is urging councils not to close any lavatories unnecessarily and warned that more money will have to be spent on cleaning streets if no toilets are open, especially since the implementation of the 24-hour licensing laws.

It is claimed that elderly people are drinking less because they are afraid of being caught short when they leave their homes. The report added that tourists also suffer, particularly in areas such as London's South Bank, which has no council-run facilities despite annually receiving 14 million visitors.

The parliamentary communities and local government committee has called for an improvement in signage, with a nationally recognisable symbol, as well as leaflets and website information showing locations, opening times and cost of toilet facilities.

MPs also warned authorities against using laws designed to help disabled people as an excuse for tearing down old lavatories.