Firm shells out £135m for Westleigh 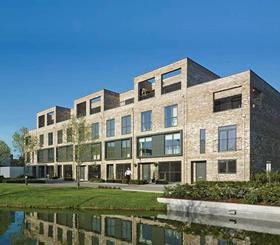 Countryside has splashed out £135m for regional housebuilder Westleigh Group.

It works across the Midlands and South Yorkshire and has a landbank of close to 5,000 plots and in its last financial year, the firm built 1,159 mainly affordable homes.

It was founded in 1985 by current chairman Chris Beighton, who will step down from his role on completion.

Countryside, which was behind the recently RIBA awards-shortlisted Aura housing scheme in Cambridge (pictured), said the rest of the management team will remain with the business along with its 456-strong workforce.

According to documents filed at Companies House, Cherry joined Westleigh as a director last November.

Countryside chief executive Ian Sutcliffe said: “Westleigh is a well run business with a strong strategic, geographic and cultural fit to Countryside and provides us with an excellent platform for further Partnerships growth. We see huge opportunity in combining Westleigh’s regional expertise.”

Cenkos analyst Kevin Cammack said: “On balance this is a good deal for Countryside both strategically and financially. Its positive differentiation over ‘affordable’ rivals such as Galliford Try, Kier or Morgan Sindall, never mind the conventional housebuilders, has just got even bigger in my view.”

Countryside is due to unveil its half year results for the six months to the end of March next month.