CPA warns 25% decline this year is its most optimistic assessment

Construction output in the UK is expected to fall by a record 25% during 2020, according to the Construction Products Association.

The decline is the most optimistic of three scenarios modelled by the CPA and is based on a V-shaped recession affecting primarily the second half of March, April and May, followed by a recovery from June at a slower pace than the initial decline. 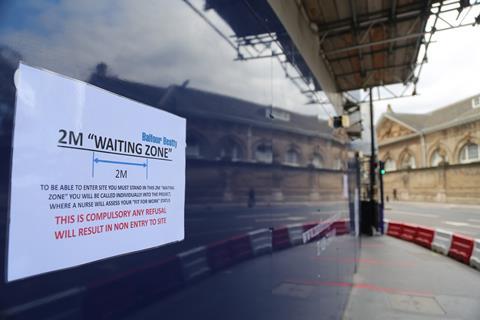 The other scenarios include a W-shaped recession, which represents a second wave of infection and lockdown in quarter four of this year and subsequent recovery in early 2021, and a U-shaped recession, representing continued restrictions throughout this year and a slow recovery next year as businesses and consumers come out of it highly risk-averse.

Sites shutting down in the wake of the government’s lockdown more than nine weeks ago and subsequent social distancing rules – which have hit productivity rates – meant that 60% of planned output was lost last month, the CPA said.

The falls in output in April varied across sectors and nations – with an estimated 83% of work in Scotland lost because of more stringent lockdown measures and where all non-essential construction work has been banned.

Housebuilding was the worst affected sector with 85% of work gone while residential repair, maintenance and improvement work was down by 60%.

Non-residential new build saw a drop of 60% but the non-residential repair and maintenance sector fared better with just a 20% loss – largely because work to repair out-of-use buildings such as schools and infrastructure jobs, including road and railway work, was brought forward.

Noble Francis, the CPA’s economics director, said: “For the fortunes of construction more generally, the near-term effect of covid-19 on the economy and employment are likely to be considerably greater than those faced during the financial crisis of 2008/09.

“In addition to these issues around the general economy and construction demand, productivity on site has fallen significantly due to social distancing and other safety, which means that construction activity will take longer and cost more. Even in our most optimistic scenario, construction output bounces back by 25.5% in 2021 but, with growth starting from a low base, output will still be 6% lower than in 2019.”

According to the ONS, construction shrank by a record 5.9% in March alone and during the first three months of the year was down by 2.6% - the largest decrease in quarterly growth since the second quarter of 2012 where it shrank by 2.9%.

Last week Wates became the first major contractor to say it was cutting swathes of jobs because of the slowdown caused by the pandemic.