The man in charge of Crossrail has said around 400 members of the project have been deemed so critical to the scheme they are working apart from each other in order to prevent a covid-19 outbreak from delaying the job even further.

Mark Wild told a London Assembly transport committee, the measures have been put in place to make sure entire teams aren’t struck down by the virus at the same time. 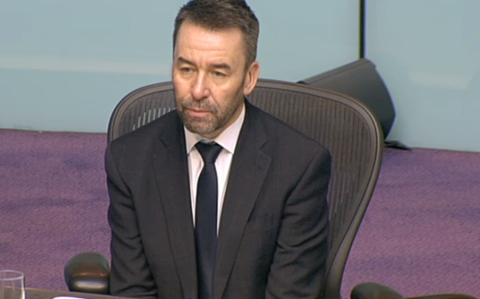 Wild (pictured) said: “We have 400 people in Crossrail who you might term mission critical and for those people we put a lot of effort into ensuring they have the appropriate backfill and that [they have] buddies and partners that they don’t come across in the physical world.

“I’m very, very proud of my team and the sacrifices and professionalism about how they sacrificed some of their own personal lives over the past year to keep themselves safe and distant.

“In that group of 400 who are mission critical we have no infections or cases of self-isolation, which is a testament to their own work.”

Tradesmen who come to site by car have also been asked to come in alone – rather than share rides – with Wild saying this way of getting into work had proved to be the most common source of infection on the scheme.

He added: “Covid did impact us in the early part of this year, just like everyone else. We initiated a safe stop but we recovered productivity within 12 weeks.

“We don’t anticipate covid having anymore impacts on us, either productivity or financial.”

Earlier this week, the scheme was given an extra £825m taking its overall budget to £18.6bn.

The figure is around £300m less than the £1.1bn the project said it was going to need back in August.

While not ruling out that it may be forced to go back to government to stump up the difference, TfL commissioner Andy Byford told the committee that the project’s leadership was doing everything in its power to deliver within the agreed funding.

He said: ”It is certainly possible and that is what we are hoping to do. We are looking to deliver the project for as little money as possible in the least amount of time possible.”

The scheme had an original budget of £14.8bn and had been scheduled to open in December 2018. But it will now open by June 2022, more than three years late.