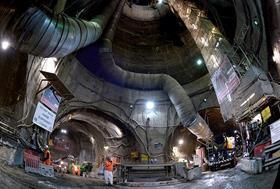 Crossrail 2 Growth Commission chairman Sir Merrick Cockell has revealed the members of his group who will look at how Crossrail 2 can boost economic growth.

Plans for the Crossrail 2 Growth Commission were announced by Mayor of London Boris Johnson in July, where he outlined how the body will look to use the £30bn transport project to create economic growth in the route’s surrounding areas.

Transport for London’s analysis suggests the railway could unlock up to 200,000 new homes and support 200,000 additional jobs across London and the South East.

The deputy chair of the commission is Daniel Moylan, who is the Mayor of London’s advisor on aviation and Crossrail 2.

Commenting on the make-up of the growth commission, Boris Johnson said: “Sir Merrick has assembled a stellar cast to work alongside him and under his stewardship the Crossrail 2 Growth Commission sets off firmly on the right track.

“The work of the commission will be absolutely vital to ensuring that Crossrail 2 becomes a transformational railway, delivering economic growth, new homes and jobs in London, the South East and across the UK.”

The Growth Commission will report in spring 2016. Should Crossrail 2 get the go ahead, construction is expected to start in 2020 with services starting in 2030.

A public consultation into Crossrail 2 will begin in October, providing more information on the proposed route and stations.