Contractor productivity will have to get better if Crossrail is to meet its revised opening deadline, the scheme’s boss has admitted.

Mark Wild told a meeting of Transport for London’s (TfL) board on Wednesday that co-ordinating the different functions of contractors, especially tier two and tier three firms, was proving to be a headache.

“There are instances where one specific person is required at three stations at once. We need to deconflict resource demands.”

He said: “The root cause of our productivity [issue] is in the tier twos and tier threes.

“There are 4,000 people working on the project from tier ones and there are 600 people from tier twos and threes.”

He also told TfL, which is helping fund the £17.6bn scheme, that Bond Street station is being flooded with resources.

Crossrail has already admitted that it cannot run test trains through the station because work, being carried out by a Costain/Skanska joint venture, is so far behind schedule.

“The particular tier one issue is Bond Street, where we are putting in special measures with the Costain/Skanska joint venture.

“They have new leadership at Costain under [chief executive] Alex Vaughan which we very much appreciate.”

The station will not be ready when the rest of the central section of the railway is scheduled to open between October next year and March 2021. 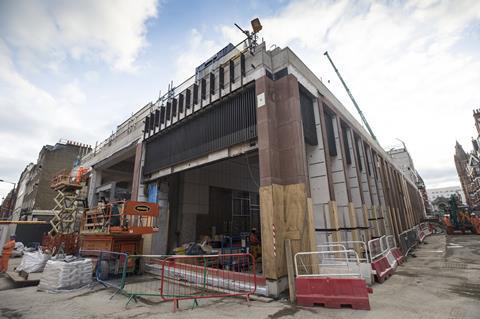 How the Crossrail station at Bond Street looked last month