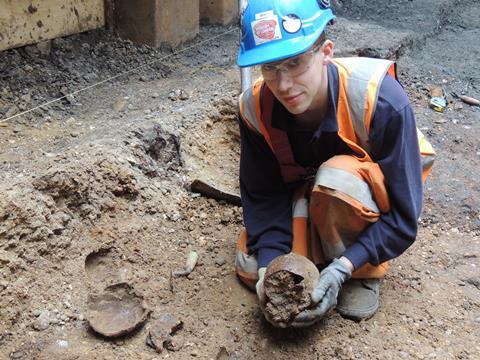 The discovery was made in sediment below the 16th Century Bedlam burial ground.

The sediment is thought to have come from the historic channel of the River Walbrook.

Crossrail’s archaeological team directed the tunnelling team on how to remove the skulls, some of which were almost six metres underground.

The skulls have now been removed and will be passed on to the Museum of London Archaeology (MOLA) for further analysis.

Prior discoveries led to speculation that the River Walbrook played host to the decapitated heads of Queen Boudicca’s rebels as they fought against Roman occupation in the 1st Century AD.

In light of new evidence, however, what seems more likely is that the river eroded a Roman cemetery near Liverpool Street and the skulls were washed downstream.

A Roman road passing through the site and some wooden medieval structures are also believed to have come from the cemetery.

The news is the latest in a long line of archaeological discoveries as Crossrail digs under London in time for the 2018 opening.

Over 10,000 items spanning 55 million years of history have been found during  the project.

Other highlights include a Mesolithic “tool-making factory”, a gold coin from the 16th century, and what appears to be a Black Death burial ground.

As well as being Europe’s largest infrastructure project, Crossrail is also the UK’s largest archaeology programme.