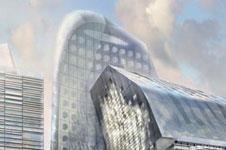 Stanhope’s iconic Walbrook Square development in the City of London has been delayed.

The main work on the £300m, 92,900m2 scheme, known as “Darth Vader’s helmet” because of its angular appearance, was due to start this year but it is now understood that it may not begin until 2009.

A source close to the Foster + Partners scheme said: “Some elements haven’t been pushed back, but a lot have. Enabling works are going on, but its real start date is in doubt.”

Project sources played down rumours that the delay was because of market turbulence, which has made it harder to finance complex commercial developments.

It is understood that it was in part caused by a potential buyer of the scheme asking for the main construction contract to be competitively tendered.

Bovis has been carrying out pre-construction work on the project since last year. It was on the verge of being appointed main contractor at the end of 2007, but it is now understood that Stanhope has been forced to put the scheme out to tender, with the result yet to be announced. Bovis remains favourite to win the scheme.

It is also understood that there have been legal issues with London Underground.

Phase one of the project, designed by Norman Foster in collaboration with Jean Nouvel, was originally due for completion in 2011.

Simon Pritchard, the director who headed Bovis’ troubled Golden Square development in Warrington, has left the company to join Carillion’s building division in the Middle East.