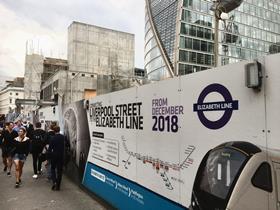 The government today announced it has pumped £350m into Crossrail to keep the £15bn project on track after it was revealed in August the high profile transport scheme was likely to be delayed by up to a year.

Described by the Department for Transport as an “interim measure”, the loan will take the form of short-term repayable financing made available to the Mayor of London’s office for the remainder of the current financial year.

“This will ensure that full momentum is maintained behind Crossrail,” the government added.

Crossrail Limited, the company building the 73-mile line across the capital and which is owned by Transport for London, said on 31 August the schedule had been “revised to complete the final infrastructure and extensive testing required” after problems emerged with trialling vital software.

Mayor of London Sadiq Khan came under fire after reports claimed he had known about the likelihood of a delay as early as July.

The Financial Conduct Authority is considering an investigation into what TfL knew about any delays and when.

The government said it was in talks with TfL “as to how any additional funding will be provided, with London – as the primary beneficiary of Crossrail – bearing any additional costs via a financing arrangement”.

TfL and the Department for Transport have commissioned an independent review of Crossrail’s governance and a separate review on Crossrail’s finance and commercial position, ministers said.

When opened late next year, Crossrail will eventually carry up to 200 million passengers annually.