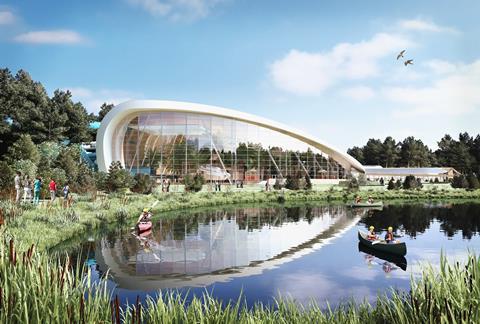 The company already has five villages in the UK – all in England – and is now planning a new one just outside the town of Ballymahon, County Longford, around 90 minutes drive west of Dublin.

The village will consist of 470 lodges, 30 apartments and 21,200sq m of centre buildings including swimming pool and spa, sports facilities, shops, restaurants and bars.

Once built, the park will have capacity for up to 2,500 guests at a 160ha site at Newcastle Woods.

Holder Mathias worked on Center Parcs’ fifth UK park in Woburn Forest, Bedfordshire, which opened in summer last year. Others who worked on that scheme and who are working on the Ireland project include consultant Edmond Shipway and planners NTR Planning.

Center Parcs has bought the Ballymahon site from Coillte, the Irish state-owned forestry company, with the planning application filed with Longford county council. The €233 million (£164 million) scheme is due to open by 2019.