A £100m mixed-use scheme in Liverpool stalled by a police investigation into its developer is set to start again three months after it went into administration.

Work on the £100m Aura hotel and student accommodation scheme ground to a halt in the wake of a probe into Elliot Group founder Elliot Lawless.

He was arrested last December on suspicion of fraud along with a Liverpool council official believed to be regeneration chief Nick Kavanagh. Neither man has been charged.

The scheme, along with two others Elliot Group was developing, went into administration in March. Aura was being built by Liverpool contractor Vermont.

But the job is now set to restart after Lawless handed over the site, and a neighbouring plot to provide access, to a consortium of the scheme’s original backers.

Lawless will complete the hotel while investors, which include the developer’s largest backer Mewstone Ridges, will finish the student accommodation.

Anna Doeff from Mewstone said: “This is the best possible deal we could arrive at. Credit is due to Elliot Lawless for working so hard to find a solution that protected our interests.”

Lawless, who has denied the police allegations, said: “My motivation throughout the administration process was to protect my investors and so I’m pleased with the outcome. I wasn’t about to leave them high and dry.”

He said he was looking to sort out similar deals so that the other two sites, a £250m residential job in Liverpool called Infinity, also being built by Vermont, and a £70m scheme in Manchester called Residence can be completed as well.

Paul Cooper and David Rubin of David Rubin and Partners who handled the sale of the Aura site added: “This was a complicated procedure which could not have been resolved without the collective buy in and efforts of the Elliot Group and the investor consortium.”

In March Lawless launched a high court challenge into his arrest, which he said was “completely without foundation”. 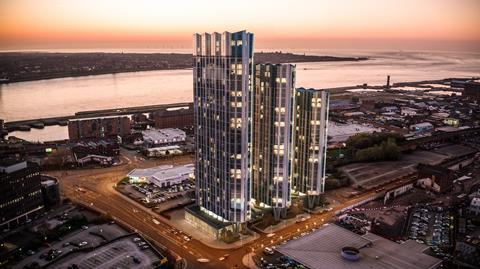