Mining giant due to move out next year

A scheme by architect Sheppard Robson to revamp and extend a building owned by the Crown Estate and occupied by Anglo American has been given the OK by Westminster planners.

The mining giant and its De Beers diamonds subsidiary is due to move out of 20 Carlton House Terrace next March into a new headquarters building at Charterhouse Street in Hatton Garden.

Developer Clivedale London has been given the green light to refurbish the 1970s-built, eight-storey building off the Mall in London’s St James’s conservation area.

Work will involve replacing the existing mansard roof and roof level plant with a two-storey vertical roof extension which, combined with work to extend lower floors, will increase space by more than 2,700 sq m. 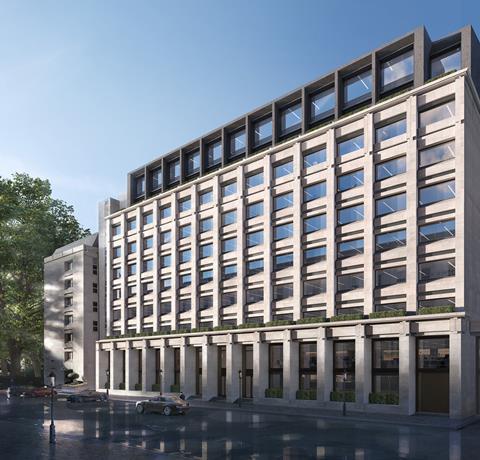 The 1970s building is being given a makeover by Sheppard Robson

Clivedale said it wants to make the building’s workspace more modern for future tenants and improve its connectivity to nearby Trafalgar Square.

Others working on the scheme include structural engineer Campbell Reith and environmental consultant Hoare Lea.

The building neighbours the Crown Estate’s 24 Carlton House Terrace which was given planning in August 2016 to create a two-storey penthouse flat drawn up by John McAslan + Partners. Aecom is structural and building services engineer on this scheme.