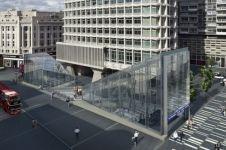 The Greater London Authority will offer a 20% discount on the Crossrail levy for new office developments until 31 March next year in order to encourage building activity.

Developers, retailers and councils had warned the Boris Johnson, mayor of London, that the section 106 contribution, which is intended to raise £600m towards the railway, would impede development.

The levy is set to be charged on applications for new office space above 5,000sq ft in London's ‘central activities zone,' Wandsworth and the Isle of Dogs once the London Plan – now in its second draft – is finalised.

Johnson has already withheld planning for some schemes until they promise to cough up the levy. However, he has nearly always made last minute deals with developers which fall far below the sum nominally due. These are often much lower than the 20% discount.

For example, the mayor’s office demanded a £7.6m payment from Land Securities towards its Victoria scheme before finally settling on £1.2m.