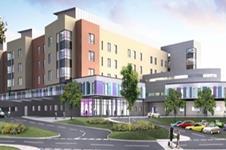 Consultancy firms Drivers Jonas and Davis Langdon have teamed up to manage a £42m renovation of several Victorian hospital buildings in Stoke-on-Trent.

The work, commissioned by the North Staffordshire Hospital NHS Trust, is part of a major refurbishment programme at Stoke’s City General Hospital.

The renovation will comprise over 450,000 sq ft across four existing buildings, which are being vacated as the hospital’s services move to new PFI wings.

Once completed, the refurbished buildings will be populated by departments from the nearby Royal Infirmary Hospital, which has merged with City General.

"But by collaboratively working with Davis Langdon we are able to offer the trust the same range of benefits that partnerships provide.”

The two firms have also hired as a team to project manage the £5m upgrade and refurbishment of Haywood Hospital for Stoke-on-Trent Primary Care Trust.