The decline in output in the education sector will have a significant impact on regional construction workloads over the next two years, according to a report by the consultants Hewes & Associates.

The Construction Regions: May 2011 report forecasts that as public sector projects - in particular education-related schemes - decline between now and 2013, regional construction output will be hit, with all UK regions bar London experiencing a reduction in output this year.

The decline will continue in 2012, with up to 11% falls in Yorkshire and Humberside and the West Midlands, the report argues. While most regions will experience a levelling off, if not an upturn the following year, Yorkshire, where education has accounted for 60% of all new public sector non-housing orders over the past two years, is the only economy not forecast to grow in 2013. The whole public non-housing sector has accounted for a quarter of orders in Yorkshire in the same period.

Major infrastructure and commercial work in London will help the capital offset the impact of a fall-off in areas like education and public sector housing. However, Martin Hewes, founder of Hewes & Associates, argues that London will also face considerable challenges. He said: “In London the education market is as large as the office market. If it were to fall by 50%, that’s a lot of offices to be built.” 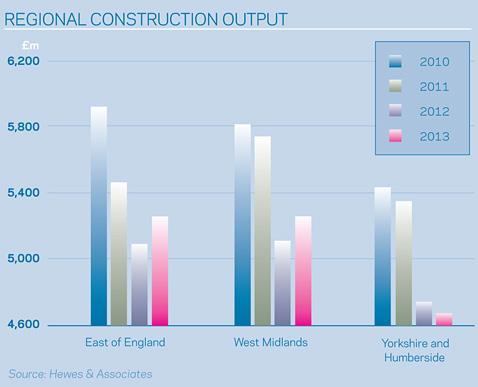