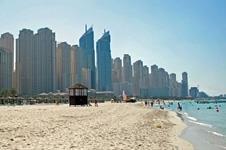 Troubled Dubai developer Emaar Properties has said it will not ask the government for a slice of the $10bn emergency fund aimed at helping clients and other companies in the emirate repay their debts. Emaar, the largest listed UAE property developer, is among the clients British firms in the Gulf say owe them money. More than half of Dubai’s construction projects are on hold and consultants and contractors say that payments are late and some fear they will not be paid at all. For example WSP is thought to have set aside £4m to cover bad debts in the Middle East.

An Emaar spokesperson told Building all debtors would be paid but did comment specifically on how long it would take: “Payments for contractors and consultants are based on a credit cycle and set deliverables agreed with them. All payments that meet the criteria have been honoured and will continue to be cleared, in line with our contractual agreements.”

Emaar told local press it has not held discussions with the government regarding access to the $10bn bail out money as it "believes it can handle it (the situation)."

It also unclear whether fellow major developer Nakheel would be getting any of the funds. A Nakheel spokesperson said: “It’s not something that anyone at Nakheel would be in a position to discuss until decisions are made at government level.”

The Dubai government said that property companies would be the main beneficiaries of the $10bn bail out announced in February. Dubai secured the cash from the UAE federal government by issuing a five-year $20bn bond programme. The UAE Central Bank has subscribed to the first half of this and expected to subscribe to the rest later.