Eaga has received a takeover offer from an “independent strategic party”, according to a statement from the company.

The announcement led to a surge in the share price of the green technology firm from a low point of 51.25p in December last year, to a high of 92.75p this week.

The statement released to the stock exchange revealed that negotiations had moved beyond Eaga’s strategy for the social housing sector and now focused on funding.

The outcome of the takeover bid depends largely on the response from the Eaga Partnership Trust, Eaga’s largest shareholder.

The trust holds about 37% of the firm’s shares on behalf of Eaga employees. It has indicated that, subject to a review of any proposed deal, it will not block a potential takeover of the company.

Andy Brown, an analyst at Panmure Gordon, said the firm’s green activities are an attractive opportunity for prospective buyers.

He said: “The green angle is perhaps the greatest asset for Eaga when it comes to negotiating a deal.

“Their strategy of fitting solar panels to homes in the social housing sector would be viewed by a bidder as a nice little add-on. It could be key in securing a takeover.”

When the cuts were announced Eaga released a statement which revealed the full extent of the hit: “Funding for the Warm Front Programme for the 2010/2011 fiscal year is currently £345m and the statement today confirmed a budget of £110m in 2011/2012 and £100m in 2012/2013, which is materially lower than our expectations.”

Panmure Gordon’s Brown was cautiously optimistic about the impact of the latest takeover speculation.

He said: “Recently we’ve seen many examples of possible takeover bids stirring activity in the market with no tangible outcome in the long run.

“The company has some good attributes and I can’t foresee Eaga’s share price falling.” 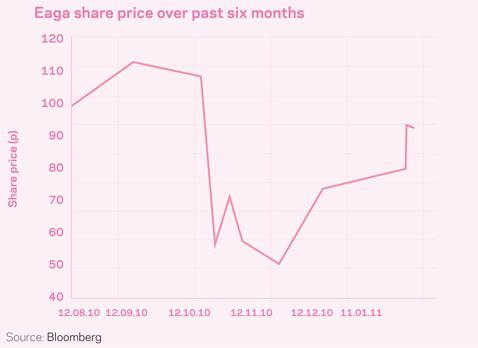