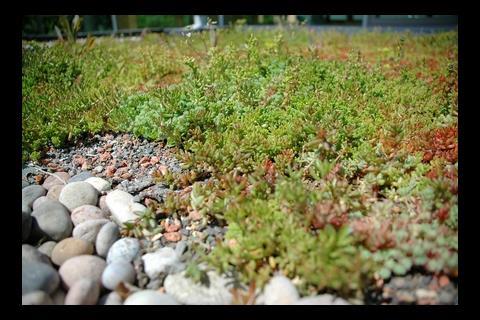 Roof of the Genesis Centre in Taunton 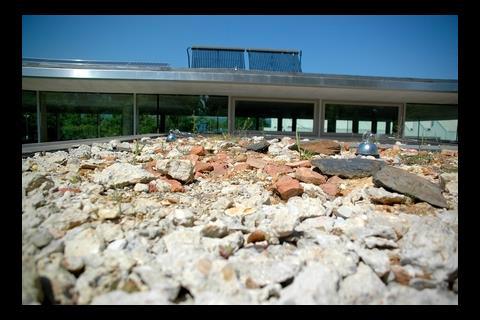 Roof of the Genesis Centre sustainable building in Taunton 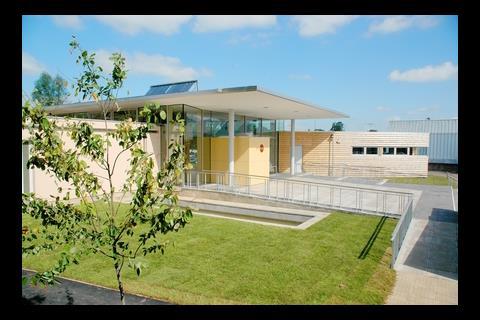 The front of the Genesis sustainable building in Taunton 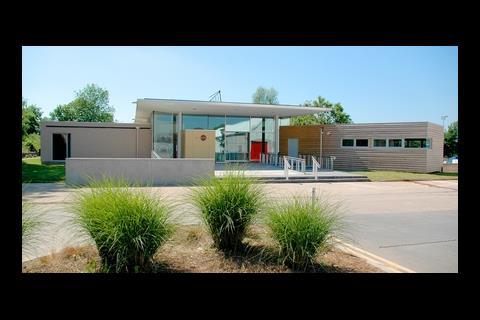 Entrance of the Genesis Building

The Genesis Centre in Taunton, Somerset, has a messianic mission to spread the word on sustainable materials and techniques.

The team behind a new sustainable building in Somerset aim to prove that a building can inspire in both its looks and its ability to educate. Ian Moore, project director of the Genesis Centre, reckons the building offers a template to the industry on how sustainable materials can be used within new buildings.

The building is part of the Somerset college campus in Taunton and consists of six main areas, called pavilions, dedicated to materials and elements – there are five made from clay, timber, water, earth and straw, and one called the Water pavilion. Spread across a 7 hectare site the building, completed last year, looks clean and contemporary from the outside. Inside visitors can see how various sustainable and recycled materials, such yoghurt pots have been incorporated into the design.

The timber pavilion, which is separated into four offices and a service room, is made from a lightweight frame and is insulated using recycled newspaper. “Where recycled material could not be used, materials which will be easy to recycle have been used instead,” said Moore. The earth pavilion, which doubles up as a shop and restaurant, was constructed using locally sourced sub-oil and demonstrates the use of rammed earth blocks and cob construction.

Cob material used at the Genesis Centre building
Fired clay from Germany, which is moulded into blocks to insulate the building was used to construct the clay pavilion and three seminar rooms, made from pre-compressed bales are the main feature of the straw pavilion, which has “great” acoustics according to Moore, “If someone was murdered in the next room, you wouldn’t hear a thing,” he said. Controlled flow taps and solar heated water can be found in the water pavilion which contains the facility’s toilets.

An air lock is used in the entrance lobby so that hot air is not lost when people enter and exit the building. There is also a covered outside area and a glass forum which allows natural light into the building. Each of the pavilions is topped by a natural roof of grass and rubble which attracts wildlife and improves the flow of rainwater.

Power is provided by photovoltaic (PV) cells on the roof which distribute their energy to other parts of the college campus when there is too much. Hot water comes from a biomass boiler, which powers an under-floor heating system. And rather than let rain water go to waste, instead it is used to grow plants in pond areas around the campus. Water from the roofs is collected in a series of SUDS channels and ponds placed around the building. “70% of water on the site is sustained,” explained Moore.

Since opening a year ago, the centre has attracted visitors from all over the world. Moore hopes its success will highlight to construction companies the potential of using sustainable products for future work. He said, “The building is completely contemporary. We want to work with the mainstream and to do that we needed to have a building that would inspire others.” But according to Moore, looks aren’t everything, “It’s not just about looking, people can feel, smell and experience the benefits of using natural, sustainable materials,” he said.

The buildings upkeep is paid for by those who visit the centre attending various educational seminars or conferences. And it is set to be the venue for the Chartered Institute of Building’s (CIOB) annual conference at the end of this year. Moore said Genesis has attracted the interest of construction companies who often bring clients along to view the centre. He hopes it will inspire them to consider the use of sustainable materials in buildings.

How did it happen?

The idea for Genesis initially came from a college project to design an environmentally friendly building. From there, three architectural practices submitted designs which were reviewed by a panel from the college, the winning design coming from Architype, led by Jonathan Hines, with Whitby Bird employed as the structural engineers.

“We are delighted with its success,” says Hines, who spent three years completing the project. “What we were most pleased about, it that our original vision and idea was strongly shared by our client.” He believes that Genesis uniqueness comes from the materials used in the construction which are usually reserved for “buildings that are not so contemporary and modern.”

The main contractors for Genesis were Russell Construction, but specialist suppliers were brought in for specific aspects of the building. The rammed earth, used for the earth pavilion was contracted to Pioneer Cabins. The method involved compressing straw and foundations from the site to form a hard, concrete type substance; an expensive part of the construction process. “Very few people have the skills to create rammed earth, which is why it was more expensive,” explained Moore. “But if people are in demands for it, it will become cheaper as more people learn the skill.”

The living roofs, designed as wildlife habitats for butterflies and plants, were contracted to Blackdown Horticultural Consultants.

The centre has received positive comments from visitors, but perhaps the most rewarding comment comes from its patron, Grand Design’s presenter, Kevin McCloud, who described the building as “a brilliant piece of contemporary architecture.”