Economy exits recession, but only just 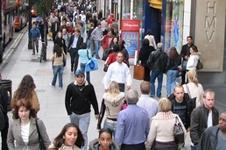 Government statistics show growth of 0.1% in last quarter of 2009, bringing 18-month recession to an end

Preliminary figures, released today by the Office of National Statistics, show that the British economy grew by 0.1% in the final quarter of 2009. Another sign of the uplift came last week, when UK employment fell for the first time in 18 months.

Prior to the turnaround the British economy had contracted for six consecutive quarters - the longest period since quarterly figures were first recorded in 1955.

During the recession public borrowing increased to an estimated £178bn and output slumped 6%. Figures also show that the UK’s GDP fell a record 4.8% in 2009.

The UK is the last major economy to exit recession. Europe’s two biggest economies, Germany and France, climbed out of their dips last summer. Japan and the US also returned to growth last year.

The ONS warned that its preliminary figures are based on only 40% of the data and may change.