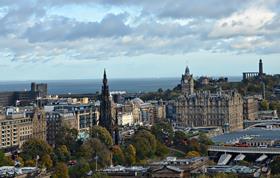 Edinburgh has soared to the top of the table when it comes to being a magnet for inward investment, according to Arcadis.

Topping the charts for economic performance, as well as being recognised for having a high proportion of skilled and educated workers, the consultant found Edinburgh had a a lot of assets, such as a well established business community, to attract potential investors to it.

On the other hand, Arcadis’ latest report, Investing in Britain: Cities Built for the Future, found London was sitting in 7th position behind smaller regional cities including Liverpool (4th) and Coventry (5th).

It said this highlighted the challenges of sustaining growth in some of the UK’s most established economic centres.

The study ranked 24 UK cities based on their performance across six areas crucial to future inward investment and growth potential. These were business environment; workforce and skills; infrastructure performance; housing; place; and city brand.

The report found the biggest risk for established economic centres, such as Edinburgh, was they could fall down the rankings if weaknesses around infrastructure and housing capacity – a direct result of population growth thanks to a city’s attractiveness – were not addressed.

Peter Hogg, UK cities director at Arcadis, said: “The important thing is to recognise which levers need to be pulled – whether that’s more affordable housing, more efficient transport or better digital connectivity – to ensure a city attracts the type of investment it needs. Most importantly, the governance of a city needs to be structured in a way that makes investment easier and more welcome.”

The UK’s largest cities, including London, Manchester and Birmingham, all faced challenges to sustain their long-term attractiveness to investors, the report added.

The volume of work needed in housing and transport infrastructure to sustain these big cities, sharing the benefits of economic success and ensuring long-term investment appeal, was a major challenge for devolved government, according to the report.

For large cities like Manchester and Birmingham, a lack of skills was highlighted as the potential biggest barrier in reaching their full future potential as an investment destination.

It said the collection of industries such as manufacturing and automotive in theses areas had made them a thriving environment for investment.

But Arcadis said if they wanted to attract more future investment the skills shortages would need to be urgently addressed through education and inward migration.

15 most “investable” cities in the UK