Government needs to go back to school on PFI funding

Nearly two years after the Building Schools for the Future programme was abolished, school building remains a controversial subject. With the estimated cost of outstanding repairs and maintenance exceeding £20bn, the extent of the problem is clear -. a resolution is not. Contract awards were few and far between and, inApril, the CPA/Barbour ABI education contract awards index fell to 34 - over a third lower than in April 2011 and 5% down compared with March.

With public financing in short supply, unlocking the financing might of the private sector is essential. The government has frequently acknowledged this, but repeated delays to the long-awaited return to PFI financing via the Priority Schools Building Programme - successful bidders are now expected to be announced almost 12 months later than planned - have left the education building sector in limbo.

By delaying on this, the government has done little to nurture the long-term relationships that would be beneficial for all. The near-term outlook for activity in the sector is subdued as a result. 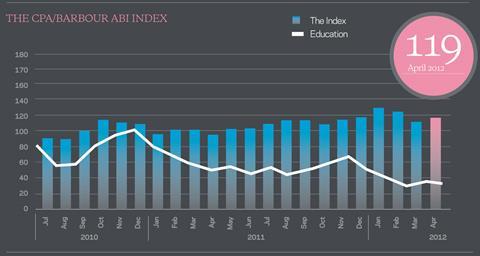