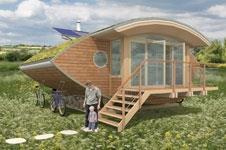 Following on from last year’s launch of its Rural Zed system, this year Bill Dunster’s ZEDfactory launched the LandArk. The boat inspired building is designed to be a cost effective way of providing a zero carbon off grid accommodation, but what stands out is its timber structure. Matthew Hoad, architect behind it, says it has been designed to need no metal fixings and uses joints based on traditional joinery techniques. “The entire timber structure will fit on just six pallets and can be put together by four people using nothing more than a hammer,” he says.

The concept uses a highly insulated envelope that can be sheathed in a variety of cladding and roofing materials. The cost of the kit is around £60,000.

LPG supplier Calor and Ceres Power announced that it will have a CHP fuel cell boiler available on the market by 2012. The appliance is designed to replace existing domestic boilers and the company any claims the system could halve the annual CO2 emissions of a home. The firm has in its sights set on rural off-grid areas where they estimate oil fired boilers currently make up 60% of the two million installations.

The single wall-mounted unit provides up to 28kW of thermal energy and 1kW of electrical energy. At the heart of the unit is a fuel cell stack which produces heat and power in roughly equal proportions and Ceres has developed a method of using stainless steel as the main component which, says James Sheward, head of communications and government relations at Ceres, helps keep cost down and boosts reliability.

According to Sheward the unit is currently at the advanced stages of ‘alpha’ testing and they will commence with ‘beta’ testing later this year. The target cost will be around £2,000 higher than a conventional boiler installation.

Aimed at Housing Associations, housebuilders and the self-build market the system uses three panel configurations which sit on an insulated ply-wood ring beam to and which provide enough flexibility to meet most designs. Panels are provided pre-insulated in a variety of insulants to match and exceed Building Regulations. The first floor and roof sections can be built at ground level and craned into position to avoid working at height.

With the growing interest in Passivhaus Ecobuild saw the timely launch of Green Building Store’s ENERsign window and door range into the UK. These are part of the firm’s new Passivhaus range and, claims the company, offers one of the world's lowest window U values at 0.65 W/m2K by using a composite wood and fibreglass design. Certified by the Passivhaus Insitute, ENERsign offers an option for specifiers of Passivhaus, AECB Gold Standard, CSH Level 5/6 buildings and other ultra low energy buildings.

Panels made from soya

Slightly quirky was Steward Design Panels launch of a new Eco Design Panel - Kirei Board. This is made out of the reclaimed stalks of Sorghum, a soya species which are normally burnt. Steward Design Panels buys them from the farmers, and with low energy and a water-based formaldehyde free glue makes them into panels which can be used for interiors.

Finally for refurbishment projects, Schöck has brought to the UK a system for preventing thermal bridging when connecting balconies and features such as brise soleil. There are three options for concrete to concrete, concrete to steel and steel to steel fixings which minimise heat loss and prevent condensation.

Natural Building Technologies launched its range of HempWood Batt insulation which comprise 55% wood fibre, 30% hemp fibre and 15% thermoplastic binder to make a semi-rigid batt that is suitable for use in timber frame structures, in loft spaces, between rafters and in walls and floors.