A housing association has won planning permission for the large-scale regeneration of part of Laindon town centre in Essex, taking in three sites and delivering 224 homes plus shopping and health facilities.

The proposals, drawn up by Pollard Thomas Edwards and CF Møller, will also deliver a new headquarters for client Swan Housing.

In addition to replacing the 1960s Laindon Centre, the programme will also regenerate the site of a supermarket in Manor Road and the Landmark site, on the edge of the Five Links Estate.

Swan said the proposals – which cover a total of 5.6 ha – would provide a new High Street for the area, as well as housing ranging from apartments to larger family houses and public-realm enhancements that would benefit the whole area.

The high-street element will be made up of eight blocks with retail and commercial use at ground-floor level and homes above. 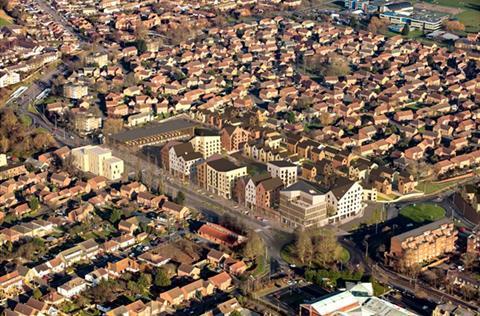 Aerial view of the Laindon proposals

Pollard Thomas Edwards partner Carl Vann said the scheme had been drawn up in close consultation with the local community and aimed to develop a high street that was a “true centre of gravity” for the wider area.

“The proposal re-imagines the centre of Laindon, bringing not just bricks and mortar, but a wider view to deliver an attractive walkable setting for new homes, shopping and working; whilst also addressing local resident concerns to reduce traffic speeds and promote a sense of community and neighbourliness,” he said.

Geoff Pearce, Swan’s executive director of regeneration and development, said Basildon council’s decision to approve the proposals was “a momentous day for Laindon” and  expected work to be under way by the end of the year.