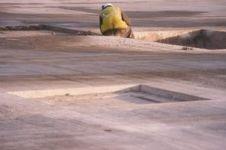 Europe’s construction output fell 1.1% in September 2009 against the previous month. The figure was revealed in a new report from Eurostat, the statistics office of the European Communities, which looked at both the 16-nation Eurozone and a 27-nation group including the UK, known as the EU27. It found that in August output for the Eurozone rose slightly, by 0.1%, and in the EU27 it fell by 0.1%.