Everton to send in plans for new stadium by year end

Everton football club is to press ahead with plans for a new waterfront stadium and which could also see over 200 homes built on the site of its existing ground, after securing public support.

The club said the support received means it will now submit a planning application for the new ground, designed by US practice Dan Meis and London firm Pattern Design, and redevelopment of Goodison before the end of the year.

Everton’s plans for Goodison are for up to 48 houses and 160 apartments to be built in addition to offices, shops, healthcare and education facilities and additional homes for supported living. Apartments would be built in towers of anything up to nine storeys.

The club will relocate to a new 52,000-seat stadium built in Bramley-Moore dock on Liverpool’s waterfront. It will form part of Peel Waters’ £5.5bn plans to regenerate the city’s waterfront. 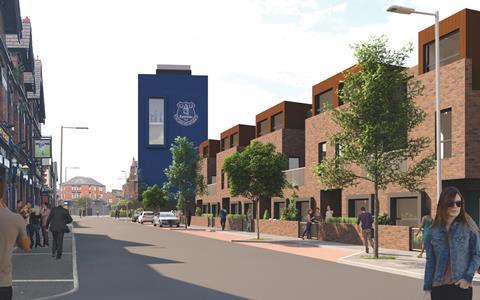 How the new homes at the redeveloped Goodison Park will look