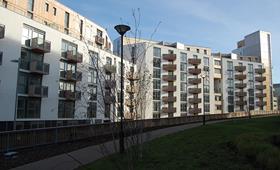 The extra cost attached to building zero-carbon homes has halved over the past three years, a major analysis has revealed.

However, the last time such a costing was calculated by the Hub and its partners in 2011, it found a zero carbon semi-detached house was likely to cost £11,891 more than a home built to the 2010 regulations.

The report suggests a fall in the cost of building semi-detached homes to the zero-carbon standard by as much as 57%.

Although the underlying assumptions and methodologies of the two studies were different, the report said the costings were “broadly comparable”.

The report also found a significant fall in the costs of building zero-carbon homes for all housing types.

The additional cost of zero-carbon homes was even smaller when compared with the 2013 Building Regulations, which demand higher standards of energy efficiency than the 2010 regulations, with a semi-detached house costing up to £4,700 more to build to the zero carbon standard.

He said the next step was to raise awareness of the “huge energy cost savings to be realised as a result of choosing to buy a new-build home, compared to an older property”.

John Slaughter, director of external affairs at the Home Builders Federation, said although the costs of meeting the zero carbon target were “lower than previously expected”, they “remained significant” and were “a challenging objective for the industry”.