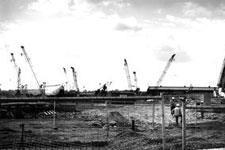 A huge fall in UK demand is forcing contractors to hold their prices in spite of soaring resource costs, according to the RICS' latest tender price index.

The price of new construction work during the second quarter of 2008 remained the same as in the previous quarter, while materials costs rose 5.5 %. Overall, new orders were down 8% compared with the same quarter last year.

New work output is expected to fall by 2% during 2008 as a whole, and by 3% next year, with private housing, private commercial and private industrial continuing to be hit hardest by the global economic crisis.

Peter Rumble, information services manager for the RICS' building cost division, said: “With output levels set to decline in all sectors but infrastructure and public non-housing, competition for tenders will be much higher.

“Contractors, or their subcontractors, will increasingly have to bear the brunt of any increases in resource costs, and will not be able to pass them onto the client in order to secure new orders.”