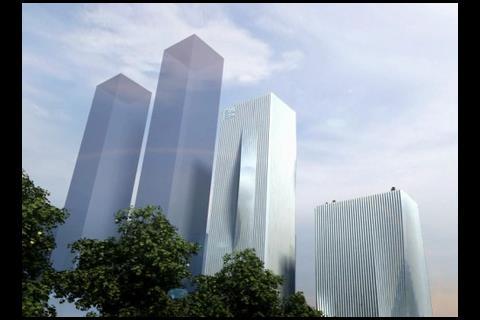 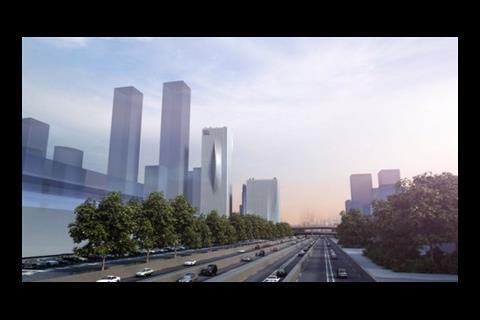 Danish architect BIG, working with Arup and Transsolar, has designed a 96,000m2 skyscraper to be the headquarters of China’s Shenzhen Energy Company located in the centre of Shenzhen. The origami-inspired tower, called Shenzen Energy Mansion, will feature a sustainable facade that uses both passive and active measures to minimise energy use. The facade will resemble a folded skin that shades the office complex from direct sunlight and integrates solar thermal panels, reducing the overall energy consumption of the building.

Danish practice BIG is working in China. I wonder exactly how long it took it to come up with the idea of Origami as a concept? Culturally relevant and sounds vaguely organic, it probably thought. However, whilst the architect’s reference to origami might suggest a slightly derivative architectural approach, its understanding of this typology seems anything but.

The skyscraper has evolved as an economically efficient way to provide flexible, functional and well-illuminated workspaces for dense populations of professionals. It has, however, evolved at a time when air conditioning and electric lighting were seen merely as modern conveniences to contemporary demands, without too much thought being given to environmental consequences or energy shortages.

Now, BIG isn’t looking to reinvent the skyscraper, but it is keen to catalyse a change: “The Shenzen Energy Mansion will appear as a subtle mutation of the classic skyscraper - a natural evolution rather than a desperate revolution”, comments BIG founder, Bjarke Ingels.

But whilst subtle, this evolution has the potential to be significant. In fact, the design of BIG’s ’origami’ facade, with integrated solar panels, will drastically reduce energy consumption by as much as 60%.

Thankfully, the architect acknowledges that, for this shift in approach to become universal, it cannot be at the expense of function and efficiency. BIG’s usual brand of ’pop’ architecture has been refined, and its ability to - often literally - apply concept to facade appears to have paid off.

BIG’s skyscraper exhibits a strong example of skyscraper design with integral sustainability incorporated into its curved façade. As to how strongly the building portrays its origami influence compared to other buildings of a similar non-inspired form, is in my opinion a factor less easily argued. What is clear from the visuals is the building’s proposed impact on the Shenzhen skyline.

This is suggested by the subdued appearance of the other, often-taller buildings within the visual. The skyscraper with its striking curve appears to propose a new focus among the buildings of the city.

Pradumn Pamidighantam’s verdict China has made an impact with the Olympics with the mind-boggling structural feats of the Bird’s Nest and with the aesthetical blue skin of its National Aquatic Centre. It’s now making its mark through the genius of Danish practice BIG. The search for iconic buildings has always been around, yet there is an increasing (positive) effort to create sustainable buildings.

Taking its inspiration from origami, BIG has created a truly innovative building, using the exterior facade in a unique way by reducing the heat gain and subsequently keeping the building cool. Integrated solar panels absorb the sunlight using it to power air conditioning and dehumidifiers for the working spaces of the building.

BIG’s proposal for the international energy company Shenzhen is a notable one and does so with a bit of flare. Though I see no real purpose for this fold that looks like a sand-dune turned upright and prompts the question, ‘why?’. Yes, it creates a great view over the city and a passage for light to enter the building in an interesting way, yet the question still remains unanswered of why that particular shape?

And what specific relationship to origami it has, I cannot seem to find. It worries me when I see things that seem to fulfill the purpose at hand, but then go off and do something else, just to say, ‘look at me!’.

Pradumn Pamidighantam and Clarissa Wenborn are BArch (Hons) Architecture students about to start their final year at Nottingham Trent University. Thomas Greenall is a graduate architect from the Royal College of Art.
If you're a student or a recent graduate and would like to take part in the First Impressions series email nargess.shahmanesh@ubm.com.
For the latest jobs in architecture visit Building's career site.