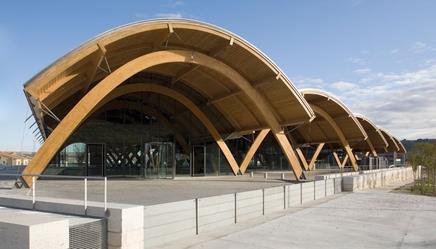 About the scheme: This is the Bodegas Protos winery in Spain designed by Rogers Stirk Harbour + Partners. The scheme has been nominated for the RIBA Stirling prize architectural award.

Tom Greenall’s verdict: Despite a recent run-in with Prince Charles, and a lack of support from Camden Council over his proposed extension to the British Museum, the 2009 Stirling judges have offered a vote of confidence for Rogers by shortlisting two of his buildings for this year’s prize. Neither, however, represents the best that the practice has to offer.

In the case of his new Maggie’s centre, it is easy to be seduced by the building’s poignant programme in spite of its unattractive colour and proportion. The Bodegas Protos winery, on the other hand, offers a typology with which Rogers seems more at home.

Douglas-Jones: This is a building which has been superbly resolved; devised for maximum flexibility the plan exploits every inch of the triangular site

With a large portion of the building’s required area buried below the surface, Rogers has once again demonstrated that he is better at designing roofs than he is at walls. Below the whole site is a double-height basement for the storage and bottling of wine, which, on the surface manifests itself as a simple plinth. The remaining facades are an afterthought and the form of the repetitive, terracotta-clad, parabolic roof is less attractive than his Barajas Airport in Madrid (which won the Stirling Prize in 2006).

However, it is in the building’s suitability-for-purpose that Rogers does succeed. The vast basement area enjoys steady environmental conditions ‘analogous to the great caves that still exist within the hillside’, allowing cool storage for the wine through effective use of the thermal ground mass. The south façade is protected by a nine meter roof overhand, while the west façade is further shaded – less successfully – by a system of large, fixed brise soleils. Rogers has also cleverly employed mixed mode air system to make the most appropriate use of the continental climate - high daytime, and low night time temperatures, give the facility free night time cooling.

Despite the unforgiving repetition of the five interlinked vaults, the modular form breaks down the overall mass and scale to create a structure that is deceptive in its volume, and more sympathetic to the surrounding context. All considered this is an inoffensive building that succeeds brilliantly in fulfilling its purpose.

Ian Douglas-Jones’ verdict: Residing in the shadows of the Medieval Peñafiel castle lies the rather sedate Bodegas Protos winery, almost in homage to the castle it sits rather too pedestrian…

Formally it seems incongruous with context, the repeated roof vaults appear to have been a default design solution, perhaps belying an ‘if it ain’t broke don’t fix it’ mentality. In this case the vaults whilst beautiful internally terminate rather clumsily from above, appearing as the lesser, uglier sister of Renzo Piano’s Paul Klee Museum in Bern, Switzerland.

Greenall: Rogers has once again demonstrated that he is better at designing roofs than he is at walls

Terracotta tiles clad the roof in a vague nod to context, but look like a dead weight on the shoulders of a light and ethereal structure underneath, which in turn kisses the solid podium below.

Designed to be read from Peñafiel Castle, Rogers’ roof as elevation doesn’t quite do it, however its tiles serve more than nostalgic appliqué: A quite brilliant ventilated rain screen dissipates the Spanish heat away from the building.

Thermal mass of the podium and well as solar shading add to the catalogue of passive energy stratagem, now ubiquitous to Rogers’ endeavors.

On closer inspection it is more evident that this is a building which has been superbly resolved; devised for maximum flexibility the plan exploits every inch of the triangular site. Within the building, and beneath the dominant roof, the resolution of detail is beautiful; the graceful Glulam arches terminate determinedly, whilst giving an airy warmth which contrasts dramatically with the clinical like sunken interior.

For winery read factory: pipes, gantries, vats and fermentation tanks are exposed and celebrated in all their chrome glory, adding a token touch of Rogers’ functional aesthetic.