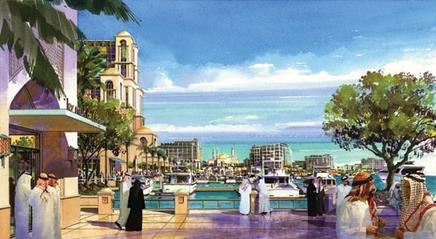 Saudi Arabia is planning nearly £150bn of development and looks set to be one of the few refuges from the global financial crisis. But is that enough to make westerners want to work there?

There are plenty of reasons to work in Saudi Arabia. There are £148bn of developments on the drawing board, and they rival anything in the UAE for eye-popping scale. Take the £62bn King Abdullah Economic City in Jeddah, being planned by the Dubai developer Emaar. No doubt it will look particularly impressive when viewed from the £6.7bn, mile-high tower planned for the same city.

The Jeddah economic city is impressive enough in itself, but it also indicates the scale of Saudi ambitions. As with Dubai, the aim is to use its oil wealth to fuel economic take-off, so that when the oil eventually runs out, the kingdom will have an economy able to survive without it. Altogether there are six economic cities and they are being built as part of the Saudi Arabian General Investment Authority’s 10 x 10 programme to place the country among the world’s top 10 investment destinations by 2010. The first stage of the city is due to be completed in 2010, while the whole project is scheduled for completion by 2020.

And while wave after wave of economic crises grip the globe, including areas many thought would be refuges such as Dubai, Saudi Arabia has the kind of stability that comes from massive oil wealth married to the kind of absolute monarchy that makes Louis XIV look like a member of the Green party.

According to Saudi bank Jadwa Investment, real GDP growth in the construction sector is a vigorous 7.5%. So while the credit crunch continues to make life nightmarish in Europe and more difficult elsewhere in the Middle East, Saudi Arabia looks like an attractive destination for British companies growing their overseas businesses, and it is certainly already attracting some big players. Bovis Lend Lease, Atkins, EC Harris and Mott MacDonald are all understood to be in the process of opening offices.

But for all the financial opportunity, Saudi can be one of the hardest places to work in the world. Doing business is difficult and living there, for many Westerners, is even harder. So is it worth the hassle?

How do they do business?

Starting to work in Saudi Arabia is certainly not easy. After the six-month rigmarole of registering your company (see box below), contractors who may be used to dealing with the English-speaking clients in Dubai must learn to conduct all business in Arabic.

Methods of negotiation and decision-taking may also come as a shock. In business dealings,the final word always belongs to the most senior person in the room, and that person will always be a Saudi national.

Deals between Saudis are done on an informal basis. “Managing relationships is the most important thing about working here,” says Sarah Carter, a director of Macro FM, a facilities management subsidiary of Mace which is working in Jeddah. She says the Saudis rely on personal trust far more than legally binding contracts: “Say you are negotiating a utilities contract. The client will say, ‘Can I have your handshake that you will do this?’ And the subcontractor will say ‘Yes’, and that’s the deal done. To question that is not acceptable.”

The Saudi concept of trust in business transactions is highly regarded. King Abdullah has condemned dishonest business practices, which means that if you are not getting paid, or think you are being taken advantage of, the Saudi authorities will take it seriously. A particularly painful quirk of the system is that asking for a percentage of your fee upfront – an approach that helps many UK firms working in unfamiliar territory – is generally considered disrespectful.

Construction in Saudi is just as fast as in the UAE. For example, it built the world’s largest petrochemical plant, Petro Ribagh, in two years. Up to 38,000 migrant workers were on site at the $10bn project at the peak of construction.

In Saudi Arabia, you won’t see women driving, alcohol being drunk or sunbathing resorts like the newly opened Atlantis Hotel …but you will see business conducted in Arabic, contracts bound by a handshake, and Dubai-sized mega-projects like the £62bn King Abdullah Economic City

Foreign nationals can struggle with the clash between their own culture and traditional Saudi attitudes. One director of a UK engineer that is applying for a licence to work in the kingdom, knows what the life of an expat is like. His main gripe is that foreign firms have lowly status. He says: “As a contractor, you’re looked down on. The feeling is that you’re just there to do a job. It’s a mercenary place. The only reason to go there is to make money.”

Then there is the culture shock. Saudi Arabia has a reasonably well-developed commercial legal system, but its penal system is based on a severe interpretation of Shariah law and includes flogging, amputation and public executions carried out by beheading with a sword. The weekly executions are held in a public arena known informally as “Chop-chop Square”.

Many of the Western luxuries afforded to expats in the UAE are banned. Alcohol is illegal throughout the country and public physical contact with members of the opposite sex, no matter how chaste, is considered offensive. If anyone were foolish enough to emulate the two expats who were deported for having sex on Jumeirah Beach in Dubai earlier this year, they could be looking at a life sentence.

The engineer says: “You’re doing business with people that don’t want you there, you’re drinking illegally in people’s back rooms. I don’t know how to sell that to people.”

However, some people say that Saudi Arabia has changed considerably in the past decade and is becoming more relaxed.

Still, Western women are likely to find life in Saudi Arabia particularly tough. Although covering your face is only required if you are a Saudi national, it is considered respectful to wear a head covering. Public areas such as coffeehouses and shopping centres are normally segregated by sex. And, as has been widely reported, women are forbidden by law from driving cars. “That’s the worst for me,” says Carter. “I’m a real petrolhead, really into my torque and horsepower. It’s so frustrating being in the back of a taxi the whole time.”

A single woman in her 20s working as the director of a construction firm, Carter would be a rarity in the UK but in Saudi Arabia she is going boldly were few women have been before. Having volunteered to work in the country (“I felt like an adventure”), she finally moved to Jeddah a few months ago from Dubai. “It’s completely different,” she says. “In Dubai I dealt with only a handful of Emiratis during the whole time I was there. Here, everyone I deal with is Saudi. We don’t speak English in the office.”

But despite the difficulties, business is going very well. Facilities management has become a booming business in the UAE, but it is a “virtually unknown concept” in Saudi Arabia. Her clients are extremely eager to learn from her. “What you have in Saudi Arabia is a group of people that want to know how everyone else in the world works, and how they can do it better,” she says. “They are happy to admit they don’t know how to do it yet. That’s why they hire us.”

Despite the inevitable lifestyle compromises, Saudi is an exciting place to be. Carter says construction workers with the travel bug should consider a trip if the chance comes up. “I’d definitely recommend it. The more we can break down the idea of it being a horrible place to work, the better. People always say they wish they had been in Dubai 10 years ago, and I say to them, come to Saudi Arabia now. It’s all waiting to be done.”

Setting up in Saudi

To operate in Saudi Arabia, you need to register with the Ministry of Commerce and Industry (www.commerce.gov.sa). This requires many licences and letters of endorsement from government, municipal and commercial bodies. You will also need to give power of attorney to a Saudi national to finalise the procedures. After that happens you will receive a commerce registration number, which entitles you to operate. The process takes at least six months.

Luckily, there are organisations to help you. Your first port of call should be UK Trade & Investment (www.uktradeinvest.gov.uk). The Arab British Chamber of Commerce (www.abcc.org.uk) can provide visa assistance, the Middle East Association (www.the-mea.co.uk) is good for SMEs and the Saudi Arabia Standards Organisation (www.saso.org.sa) offers advice.

1 King Abdullah Economic City. This is being developed by Emaar in Jeddah and is worth £62bn. Among the contractors working on it are Freyssinet Saudi Arabia and the Saudi Binladen Group.

2 Prince Abdulaziz Bin Mousaed Economic City. This is being developed by Rakisa Holdings in Hail. The 15,600ha city in northern Saudi Arabia is worth £35bn.

4 Kingdom Tower in Jeddah. The £6.7bn project is being planned by the Riyadh-based Kingdom Holding Company, and in current plans will be engineered by the UK’s Hyder Consulting and Arup. The 1,6000m-high tower will be constructed by Bechtel.

5 Shamieh Project. The Shamieh Real Estate Development Company is developing a 180ha area north of the Haram mosque in Mecca in a $9.3bn (£6.2bn) project.