Former Carillion HQ on the market for £3m

Wolverhampton office up for grabs three months after contractor’s collapse 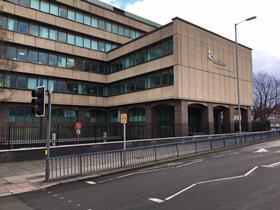 Carillion’s Wolverhampton HQ has hit the market with a price tag based on offers in excess of £3m.

Midlands property agents Bulleys and JLL have listed the property at 84 Salop Street for sale, three months after the construction and support services giant crashed into liquidation.

Noel Muscutt, partner at Bulleys, said: “This is a fantastic opportunity to acquire an eye-catching office block in a prominent location that will soon benefit from proximity to the Westside leisure development.

“The offices were comprehensively refurbished in 2015 and provide open plan accommodation that would suit occupation as a whole, on a floor by floor or part-floor basis.

“The building is close to Wolverhampton’s principal city centre business, retail and leisure offer and will be an attractive place to be based.”

The leisure-led £55m Westside scheme encompasses land between Penn Road Island and Salop Street, including the current School Street and Peel Street car parks and the area around Market Square.

Phase one of the development which will deliver a multiplex cinema, leisure space, new restaurants, a 100-plus bed hotel and a multi-storey car park.

Construction of phase one is expected to be complete by early 2020. Phase two is expected to deliver more than 300 new city centre homes and 50,000sq ft of retail and leisure space by 2022.

The building dates back to 1977, when it was built by Wolverhampton firm AM Griffiths & Sons as the new headquarters for the Stafforshire Building Society.

The building society was later taken over by the Portman, which then became part of the Nationwide Building Society, which finally moved out and left the building empty. Carillion moved in a year later, in 2008 and the building became its official headquaters in 2015.