Foster and Zaha miss out on £120m Guy’s cancer centre 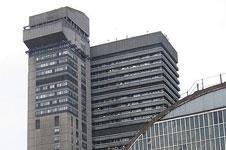 Architects Zaha Hadid, Foster + Partners and Will Alsop have been knocked out of the race for a £120m job to design and build a 12,500m2 cancer centre for Guy’s and St Thomas’ hospital in London

The news follows a shortlisting process by the RIBA, which involved the nine teams competing to design the 11-storey building being whittled down to six this week.

The teams in contention are:

The teams will now go through to the final stage, with a decision expected over the summer.

The longlist of nine included Foster + Partners with Vinci, Zaha Hadid with Balfour Beatty and Will Alsop at RMJM with Shepherd. Foster’s partner Spencer de Grey had stepped down from the judging panel in order to allow the firm to bid.

An entry from Sir Robert McAlpine with Rafael Viñoly is understood to have lost out earlier.

Guy’s and St Thomas’ NHS Trust, which engaged the RIBA to run the competition, refused to disclose the reasons for the jettisoning of the star architects. However, one source suggested the client might have been keen to have a practical building rather than spending money on an iconic design. A separate source said: “The key thing for the client team was to find six teams they felt they could work with.”

Guy’s has also commissioned BDP and Marks Barfield to masterplan a £350m redevelopment of its London Bridge estate, including a further cancer centre worth £200m.