Foster + Partners has won approval for a further reworking of its redevelopment of former Bayswater department store Whiteleys – which will increase the number of new homes at the scheme by 18%.

Westminster city council this week agreed in principle to the latest reconfiguration of the scheme, originally granted consent in 2016 and subsequently tweaked twice already, subject to the approval of London mayor Sadiq Khan.

Fosters’ updated plans – drawn up for client Queens Road W2 – will take the number of homes set to be delivered to 153, up from the previously consented 129. The rejigged proposals also deliver 14 on-site affordable homes.

The revision will boost the quantity of hotel floorspace provided by the new scheme and change access arrangements for a planned gym and cinema. Retail space is also included in the proposal. 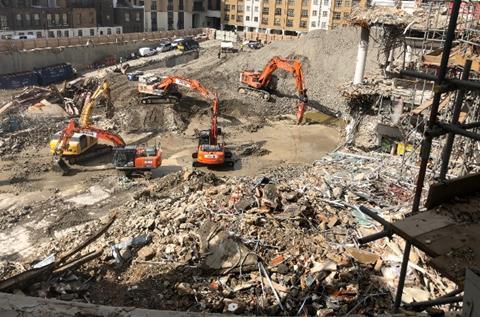 Demolition contractor Erith is tearing down the centre’s car park as well as the main shopping centre itself having already completed the removal of a number of heritage items at the site, parts of which are grade II listed.

Laing O’Rourke is understood to have edged ahead of remaining rival Sir Robert McAlpine for the £250m job.