Connected buildings will be 320m tall

Foster & Partners has unveiled plans for a pair of hurricane-proof towers that will provide luxury flats in the US city of Miami.

Called The Towers, the scheme will see 660 flats running across two interconnected buildings that will reach 320m in height.

Miami has updated its height limit regulations which had been previously restricted because of the city centre’s proximity to Miami International Airport.

A majority of the required parking has been moved underground, opening up more than 5,000sq m of public space. 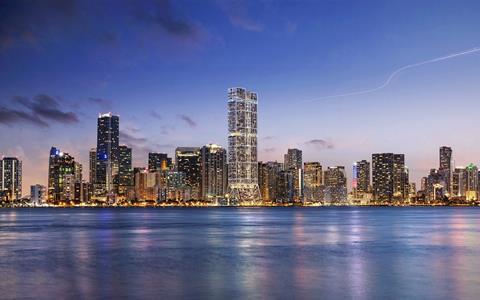 The scheme will feature 660 flats

To mitigate the effects of high winds, the building has special louvres that can be lowered over the central plaza to act as wind breakers.

The towers are designed to withstand hurricanes, braced by belt beams that tie them together to ensure stability.