Plans by Foster & Partners for a 14-storey office block opposite Aldgate East Tube station in Whitechapel have been turned down.

The scheme would have seen two buildings on Whitechapel High Street and Commercial Road demolished to make way for 39,500m² of office space.

But Tower Hamlets councillors rejected the scheme last week citing concerns over the scheme’s height, demolition of heritage assets and its daylight and sunlight effects on neighbours including a school. 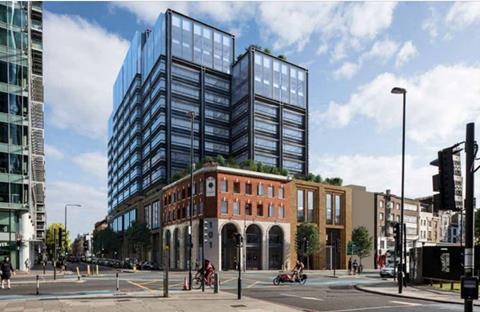 The block would have been 14 storeys in height

The 14-storey block had been amended from a 20-storey building which had been submitted for planning in September 2018. The redrawn scheme was submitted earlier this year.

The scheme, backed by South Street Asset Management for applicant Alliance Property Asia, would have been built over playground space owned by a neighbouring primary school, while providing the school with a new playground.

Others working on the scheme include QS Gardiner & Theobald as well as M&E and structural engineer Buro Happold.