Firm adds that 2019 profit remains in line with forecasts 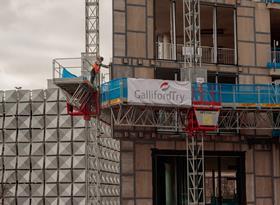 Investors breathed a sigh of relief this morning after Galliford Try announced no further bad news in its latest trading update.

The firm has been forced into a restructuring at its construction business which will see around 350 jobs go by the end of this month while it has already said its full year results will be hit with £40m of exceptional items including £10m of restructuring costs as well as further losses on its schemes to build a road in Aberdeen and the Queensferry Crossing bridge near Edinburgh.

But the firm said pre-tax profit after exceptional items for the year to June remained in line with analysts’ forecasts of between £112.7m and £116.4m.

It said the cost-cutting at its construction business was now complete while the Aberdeen road, which was more than a year late after being hit by bad weather, problems with utility diversions and the collapse of one of its joint venture partners, Carillion, is now open.

It said its Linden Homes business, subject of a rejected takeover bid by Bovis in the spring, completed 3,229 homes – down from last year’s 3,442 – but margins remained strong. The partnerships business also made “excellent progress” growing margins, the firm added.

Galliford Try has said it will reduce the amount of work its construction business does by nearly a quarter.

In future, the division will just focus on buildings, water infrastructure and highways.

The firm said a reduction in its construction arm’s revenue to £1.3bn will generate savings of £15m a year from 2021 and help push it towards a 2% margin in 2021. Last year, construction, the group’s biggest division, had revenues of £1.7bn with just over £1bn coming from buildings and the rest from infrastructure.

Galliford Try is due to announce its full year results on 11 September.