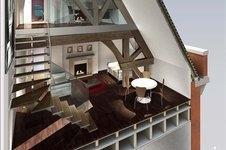 Grade I-listed building will be converted into 67 apartments, and a 244-room five-star hotel

Galliford Try has been appointed to carry out the £103m restoration of St Pancras Chambers, the grade I-listed gothic-style building which fronts St Pancras Station in north London.

The contract will see the contractor build 67 residential apartments, a £10m penthouse and a 244-bedroom five-star Marriott hotel for the St Pancras Chambers Investments company and developer the Manhattan Loft Corporation

The building, built between 1868 and 1876 as the Midland Grand Hotel, originally boasted between 500-600 rooms. These will be converted into modern residential and hotel accommodation, and the building's interior will be restored to its former Victorian glory.

It is expected that contracts will be signed by March and the project is scheduled for completion at the end of 2010.

Greg Fitzgerald, chief executive of Galliford Try, said: "We are delighted to be selected to undertake the internal transformation of this prestigious landmark, which has such great historical significance. We look forward to returning this beautiful building to its former condition.”