Gove promises overhaul of ‘out of date’ housing need formula

Michael Gove has told MPs he is looking again at the way housing needs targets are calculated.

The housing secretary, speaking in front of the housing, communities and local government committee on Monday, said: “In making a calculation of housing need overall one of the things I wanted to do is to look at how the numbers are generated in the first place.

“Because I think that some of the assumptions there are probably out of date. 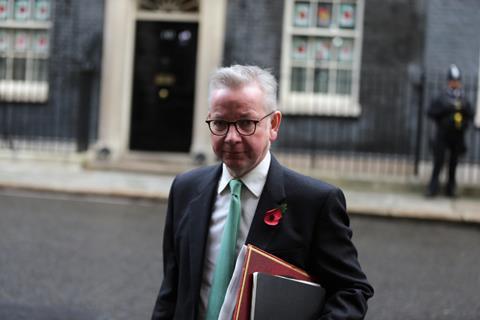 Michael Gove still wants to build 300,000 homes a year by the middle of this decade

“And I also think that some of the ways in which the use of those numbers is deployed by the planning inspector can be done in a more sophisticated way. But I don’t want to over promise at this stage.”

The way that housing need is calculated, which forms the basis of housing targets in local plans, has become a thorny issue for the government.

The standard method delivers a figure for housing need upon which most local authorities base their local housing targets. It uses projected household growth figures, adjusted for areas with high house prices, with the increases in new homes for any local planning authority capped.

Plans to amend the formula which focused more growth in high value and rural areas, which were launched alongside the housing white paper last year, prompted a backlash from Tory MPs and were eventually dropped in favour of a system increasing need in the largest urban areas by 35%.

The planning white paper itself proposed a new centralised system under which the government assesses housing need, land constraints, and other factors, and passes them on to planning authorities to implement as a mandatory target. It has been widely reported that this element of the white paper will be dropped when the reforms are finally published.

Gove also refused to put a timetable on how long his ‘pause’ to the government’s planning reforms will last for, implying he sees planning reform as just one part of a much-bigger piece of work to review housing policy.

He said: “We can’t just look at questions of housing through the prism of planning.

“Improving the planning system is one thing, but there are lots of other things that you need to do in order to make sure you achieve your goals. Our goals are to have more people in decent homes, in the areas they want to live in and with communities welcoming regeneration.”

Gove confirmed the government still wants to deliver 300,000 homes a year by the mid 2020s but downplayed the importance of hitting the target at all costs and admitted it would be “stretching” due to issues such as materials and labour market pressure and the pandemic.

“I want to make sure that people recognise that we are not taking the approach of saying ‘let’s hit that target as quickly as possible,’” he said.

“We absolutely do want to hit that target. But we also want to take account of beauty, the environment, quality, decency, to local democratic control and infrastructure as well.”