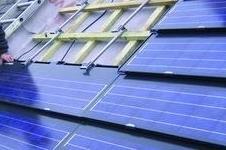 The government said it had issued £25m in grants for renewable energy systems since it launched a scheme back in April 2006. The news came as Energy Minister Malcolm Wicks called for more homes and business to follow his lead by adopting a 'go green' new year's resolution.

The grants were to install technologies such as solar panels, biomass boilers and ground-source heat pumps and included:

Energy Minister Malcolm Wicks said: "It's vital that recent efforts by world governments to reach a deal on cutting global carbon emissions are matched by action by each and every one of us. Deciding to go green and generate your own clean energy is one of the most valuable New Year's resolutions you can make. It is certainly my intention to make a difference, and make my own house more energy efficient and install clean and green electricity."

The government said that there was still £11m in grants available under Phase 1 for householders who want to generate renewable energy at home. Schools, charitable bodies and other public sector organisations can apply for a share of the £44m that remains from the original £50m set aside for them under Phase 2.

The government said that in 2008 it would introduce of legislation that will aim to 'band' the Renewables Obligation to bring on more support for less developed renewables technologies such as wave, tidal and offshore wind.